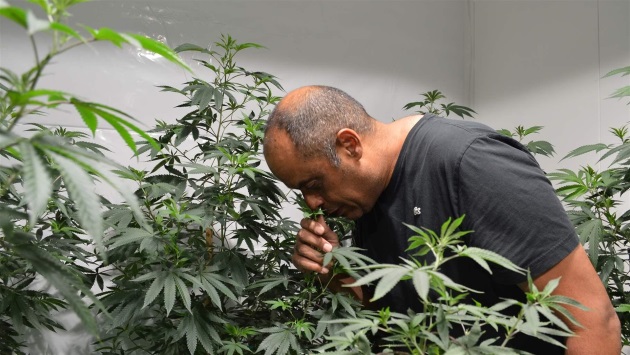 OAKLAND, Calif. — During the 1980s and ’90s, Alexis Bronson’s illegal cannabis delivery business could barely keep up with demand.

In the spring, Bronson made weekly trips to the redwood forests of Humboldt County to buy marijuana wholesale from renegade growers with farms hidden in the hills of Northern California. Bronson would wrap 5 or 10 pounds of marijuana in a plastic garbage bag, tuck it into the trunk of his rental car, and head south on Highway 101 to his hometown of Oakland.

In the 1980s, Bronson said in an interview with Stateline, he would buy a pound of marijuana for $1,500 to $1,800 and resell it for nearly triple that amount in Oakland.

But the lucrative business came with serious risks. Bronson exercised caution about where and when he delivered his product, avoiding traditional street-corner exchanges. It was the war on drugs era, and police worked swiftly to round up dealers and buyers under the mandate to crack down on drug activity.

Now, as more states legalize recreational marijuana and the federal government moves away from incarcerating nonviolent drug offenders, several cities in California are trying to atone for decades of drug enforcement that fell disproportionately upon minorities.

They’ve created what are known as cannabis equity programs, meant to welcome more minority and low-income entrepreneurs into the now-legal industry.

The programs provide business development, loan assistance and mentorships to eligible owners. Hundreds have applied in the past year. But “pot equity” has struggled with growing waitlists, and some participants allege that the programs aren’t fair to the people they’re meant to be helping.

Cities such as Oakland have created incubator programs that pair an established marijuana company, called a non-equity business, with an equity cannabis business — run by an entrepreneur whose background might otherwise make it hard to get into the pot industry.

The goal of “cannabis equity” is to lower the barriers to entry into the legal cannabis industry for people who were disproportionately impacted by the criminalization of marijuana. The programs base eligibility on a variety of factors, including marijuana convictions, residency in a heavily policed district and income.

Today, several city partnership programs require that established, non-equity businesses provide an equity business with space for several years rent-free. In exchange, the non-equity company receives faster processing for city approvals. Cities such as Sacramento plan to waive up to tens of thousands of dollars in application and permit fees for eligible cannabis businesses.

But pot equity has struggled to get going. Understaffing in San Francisco’s cannabis office has left a growing waitlist of applicants, and the city doesn’t expect to begin approving businesses until sometime in 2019, said Nicole Elliott, director of San Francisco’s Office of Cannabis. She could not be more specific on timing.

Some applicants argue that the waiting period has allowed other businesses to get an unfair head start. In Oakland, some pot equity businesses claim their incubator partners never followed through on the requirement to provide them with business development assistance or a space to operate.

Bronson, an African-American, now owns one of those pot equity businesses.

Although Bronson was never convicted of a cannabis-related crime, his income and residency made him eligible for Oakland’s program.

But two partner businesses have failed to provide him with promised incubator space, he said. In the meantime, one of Bronson’s state business permits has expired and he continues to take on debt to keep the existing portion of his business afloat.

“It wasn’t right, because they got their head start,” Bronson said of his partner businesses, who received their expedited processing from the city. “Everyone got what they wanted, except for me.”

Between 1980 and 2010, the number of inmates in federal prisons for drug offensesincreased from about 4,700 to nearly 98,000, according to the Sentencing Project, a research and advocacy group.

By 2016, that number had dropped to about 82,000 as more offenders were being routed through less-punitive drug courts and a growing number of states were decriminalizing marijuana.

African-Americans were 3.7 times more likely than whites to be arrested for marijuana possession, despite similar rates of usage, according to a report from the American Civil Liberties Union.

In Oakland, African-Americans make up about 30 percent of the population, but 77 percent of the people arrested on marijuana charges, according to 2015 data collected by the city and used to establish the equity program.

Beyond the immediate potential consequences of conviction and imprisonment, a drug arrest can have lasting effects. In a 2017 report, the U.S. Government Accountability Office identified nearly 650 collateral impacts for people convicted of nonviolent drug offenses, including limited opportunities for certain professional licenses, education and government assistance.

To mitigate those effects, the state’s recreational marijuana law allows California to clear or resentence people who were convicted of cannabis-related crimes. In September, Gov. Jerry Brown, a Democrat, signed a bill that requires the state Department of Justice to identify and send such convictions to county district attorneys to proactively clear or resentence.

Desley Brooks, the outgoing Oakland city councilwoman who helped create its equity program, said few entrepreneurs from low-income and minority communities would have a shot at entering the recreational cannabis industry without the program.

“So many African-Americans sat — and continue to sit — in jail for cannabis offenses as a result of the war on drugs,” Brooks said in an interview. “If we didn’t set up a structure to address that, I would have been doing an injustice to many people who were harmed by the system.”

Creating a program to atone for decades of unjust policing — on top of building the framework for a newly legal cannabis industry — is no easy task.

Oakland is setting up a $3 million fund to provide additional capital assistance to pot equity businesses, Brooks said, but it remains unclear when the fund will become available.

San Francisco applicants have raised the same issue, said Elliott, the director of San Francisco’s Office of Cannabis. The office set up an investment fund to provide financial assistance to cannabis businesses, such as low-interest loans. But the city has yet to allocate money to the fund, Elliott said.

She said San Francisco will likely receive part of the $10 million that the state set aside for local cannabis equity programs in September, which could go toward the city’s cannabis investment fund.

“There are equity applicants that need money now,” Elliott said. “We will advocate aggressively for that state funding.”

As of mid-December, San Francisco had 227 applicants that qualify for the equity program. Of those, about 110 want to join the city’s incubator partnership program and receive waived permit fees.

Elliott said the city will begin approving applicants next year, but she could not say when. Applicants have criticized the lengthy timeline.

San Francisco’s Office of Cannabis, which just added two new staff members to bring the total to five, is tasked with reviewing permit applications and facilitating the equity program. Elliott said adding even more staff would speed things up.

In the meantime, the city has established a partnership with the Bar Association of San Francisco to provide pro bono legal assistance to equity program participants.

Malcolm Mirage, an equity applicant in San Francisco, said the long wait has caused him to burn through capital at an alarming rate. He partnered with MedMen, a household name in the cannabis industry that is publicly traded on the Canadian Securities Exchange.

MedMen agreed to provide business development aid and an incubation space for one of Mirage’s businesses. The company also helped him negotiate leases on two other spaces, and he struck a deal that gave him six months of free rent to obtain his permits and become operational.

Mirage figured that was plenty of time. But those six months came and went, and he’s now paying expensive leases on spaces that sit empty.

“I got out of jail for selling weed and now I’m trying to do this legally,” Mirage told Stateline. “But I’m drowning right now. My businesses are going to be in a tremendous amount of debt if the city can’t get these licenses out in the next six months.”