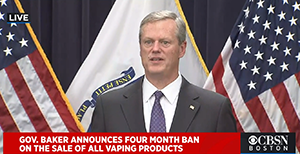 Naomi Martin of The Boston Globe tweeted live from the press conference today:

Baker reported that Massachusetts has seen 61 cases of the vaping-related pulmonary disease that’s appeared all over the U.S. in recent weeks. President Trump has urged the U.S. Food and Drug Administration to pull flavored e-cigarettes from the market, but the cannabis industry has not been immune to skepticism and scrutiny of its own vape products.

“This thing has our full attention,” Baker told reporters earlier in the day. He noted specifically that his office has worked with the Massachusetts Cannabis Control Commission (CCC)—and that the commission will enforce this ban.

Massachusetts is the first state in the U.S. to issue a total ban on vape sales.

“It’s pretty clear at this point that there’s something going on with vaping, and everyone should keep that in mind,” Baker said at the press conference today.

Shaleen Title, a commissioner with the CCC, tweeted: “This is a terrible decision. Purposely pushing people into the illicit market — precisely where the dangerous products are — goes against every principle of public health and harm reduction. It is dangerous, short-sighted, and undermines the benefits of legal regulation.”