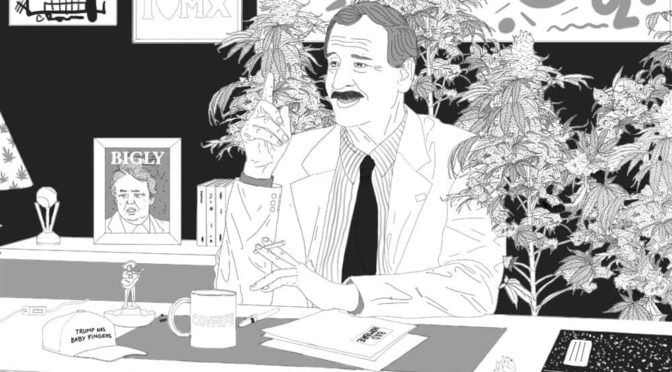 High Times recently had the fortune, privilege and honor of interviewing Mexico’s former President Vicente Fox, a man whose ideas stand close to libertarianism. The state, the government, should not intervene in people’s lives unless their decisions affect third parties, he’s argued quite often.

Discussing cannabis legalization and the business opportunities that follow, Mr. Fox mentioned he actually supported the legalization of all drugs, not just cannabis. We were hooked: not often do we get to hear the former president of one of the world’s top 15 economies, of a G-20 country, defend the legalization of mushrooms, cocaine and LSD.

His argument is based on two basic premises:

“Prohibition doesn’t work and has never worked,” Mr. Fox argued, bringing up the example of Adam and Eve who, he thinks, might have never taken a bite off the Forbidden Apple if God had explained why it was bad for them instead of straight out banning them from eating it.

“We need to transform prohibition into regulation,” he said. Consumers need to have the freedom to decide what they want. But, before this can happen, we need education, access to information and time for people to digest this new information, to get comfortable with this new paradigm where the people take care of themselves and one another, instead of relying on the state to do that, he argued.

“We need to stop thinking that the government will protect our children and families from drugs. That has never happened. Only educating at home we’ll be able to create consciousness around the fact that what’s important is moderation, rather than prohibition,” he supplemented.

Drug legalization will create a legitimate business community and put it in hands of honest entrepreneurs instead of criminals like we see today, Mr. Fox voiced. “In fact, legalization will help us create opportunities for many people who have been turned into criminals by this unjust system; people are not born criminals, they are pushed toward crime by the lack of opportunity.”

“But, as we re-legalize drugs, we will create a lot of new jobs that can help us keep young people away from crime,” he went on. “Legalization will create jobs for engineers, retailers, farmers, processing professionals, manufacturers… All of the formerly marginalized people will find opportunity and well-paying jobs.”

Mexico And The Opioid Crisis

The high demand for opioids in the U.S. has created in a war between cartels in Mexico. Many drug lords want to be the ones supplying poppy to opioids producers, Mr. Fox explained. “And this is intrinsically related to the fact that poppy is grown illegally,” he noted.

“So, instead of having people kill each other, why not produce poppy legally in Mexico and export it, legally, to the U.S.?” he suggested.

“Of course opioids are bad when they are used incorrectly. But opioids are also very useful and necessary to treat certain ailments.” So, we need to differentiate these two types of uses and have our laws reflect this difference, he concluded, calling for a comprehensive drug legalization plan for the U.S., Mexico, and ultimately the whole world.