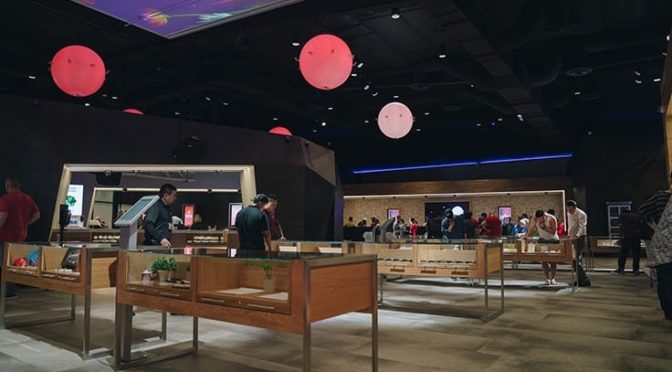 Planet 13 Holdings, a vertically integrated company based in Las Vegas known for its massive, glitzy dispensary just off the Strip, has long touted its strong tourist appeal.

Planet 13’s 16,200 square-foot dispensary, part of the overall 112,000-square-foot “Cannabis Entertainment Complex” that now includes a café, bar, and customer-facing production facility, is all about the Vegas-style experience, with its interactive LED floor, glowing orbs suspended on the dispensary ceiling that periodically move to music, and a 18-foot water feature out front.

Before the coronavirus pandemic halted tourism, 85% of Planet 13’s customer base and about half of its revenue came from people who reside outside of Sin City. Planet 13’s Superstore saw about 2,000 to 2,500 visitors each day, according to an April earnings call.

However, in March, Nevada Gov. Steve Sisolak instituted emergency declaration to prevent the spread of COVID-19, and all medical and adult-use dispensaries in the state were forced to close storefronts and move to a delivery-only model with less than 24 hours’ notice.

So how does a dispensary that caters to tourists and providing an unusual in-store experience transition to serving the local market exclusively and through delivery only?

“It really blindsided everybody,” says David Farris, Planet 13’s VP of sales and marketing. “We were lucky enough though where we had a delivery system in-house prior to COVID-19. We had already developed these delivery systems. For us, it was how do we scale it. If you’re not handling delivery yourself, if you’re not handling the touch points for the customer at every step of the way, there are a lot of issues that can happen.”

According to the Reno Gazette Journal, 38 dispensaries in the state offered delivery services prior to the pandemic. According to January 2020 data from the Nevada Department of Taxation, there are about 70 licensed retail locations in the state.

Planet 13 used to operate delivery from about 10 a.m. to 10 p.m. but once storefronts were shut down, moved to 24/7 services. By mid-April, the company was offering same-day delivery within a two- to three-hour window of ordering and processing about 500 orders per day, according to an April earnings call.

“I think the challenge for us is providing that same experience with growth. There were a lot of changes we had to make in a small amount of time, and when we made those changes, there was a huge demand for delivery that no one was ready for,” Farris says. “When we first went delivery only, we received thousands of calls with people who wanted to place an order. For us, we never did those type of numbers in delivery prior to that, nobody did.”

On a shareholder call earlier this month, Planet 13 announced it had recently expanded its delivery fleet from 5 vehicles to nearly two dozen to meet the demand, and the company would eventually have 28 on the road. The state expedited the process, but the fleet still must meet compliance components, like lock boxes and alarms, Farris says. With nearly 30 vehicles, the dispensary hoped it would be able to increase its revenue from about $80,000 per day to $100,000 per day once it added more delivery drivers, with the capacity to handle 1,000 orders daily.

Because of the demand, Farris says Planet 13 has been able to retain most of the staff.

“We really converted a ton of our budtenders and various other staff members to process and fulfill these orders,” he says. “Previously they were talking to those customers and helping people in person, now they are just doing that on the phone. We really tried to make some transitions that made the most sense.”

Many of the questions that came through initially were about how delivery and online ordering worked, but employees are also able to field cannabis-specific questions. The local market has different preferences compared to their previous out-of-town shopper, Farris says.

“Our main customer base before was the tourist customer. It was people who wanted to be very sleek and concealed and [preferred] grab and go product, but now it’s the opposite,” Farris says. “We’re … seeing a very flower-heavy customer base.”

Collaborations with local, small-batch cultivators have been popular, as well, Farris says, and a way to offer customers exclusive products in an incredibly competitive market.

Gov. Sisolak, along with Colorado Gov. Jared Polis, announced April 27 that they would join California, Oregon and Washington in the “Western States Pact,” a “shared vision for modifying stay at home and fighting COVID-19,” according to a press release. Nevada will coordinate decisions on when to open the economy together with its neighboring states, relying on the data and the current health impact of COVID-19.

Even after states allow businesses to resume normal operations, it’s unclear how tourism will look in 2020. Las Vegas’ had 42 million visitors in 2019, according to the Visitors and Convention Authority.

For now, Planet 13 is offering daily specials to compete in the locals-only market. Nevada residents have always received 20% off all cannabis products at the dispensary, Farris says, but operational changes are likely to continue as the dispensary, and others in the state, adapt to a new way of doing business.

“A local customer can always find a $25 eighth or a $25 gram of select concentrates at any time on the menu,” Farris says. “Our goal is to really scale this [delivery] fleet and serve a lot of our local customers that we may have not had prior [to the COVID-19 pandemic].

“We try to really apply our same customer service experience in a virtual way …That’s our big promise to our local community – we have a product for everyone. We know that everybody is experiencing a different situation with these quarantines, and we want to make sure people can pick and choose what they want and that we have what they are looking for.”