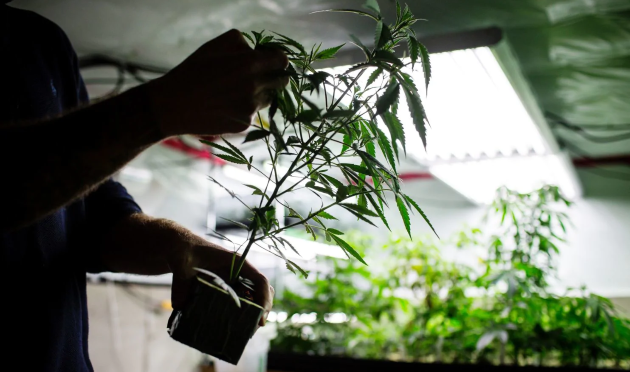 The country is facing a pot labor shortage, now that the sale and cultivation of cannabis is legal.

Beleave Kannabis Corp. wants to grow more than just pot. The Ontario marijuana company aims to build an empire of plant scientists, regulatory experts and security personnel in a nascent industry with exploding demand. But there’s a shortage of experienced staff members in Canada, which became the first industrialized country to fully decriminalize pot in October, said Beleave’s chief science officer, Roger Ferreira. So Beleave, like dozens of other licensed producers, is pressing local universities for help. “I’m going to pillage the top of your class,” Ferreira said. “All your 4.0 GPAs, send them this way.” Nearly a dozen colleges nationwide are adding or expanding courses designed to train the next generation of marijuana producers, often at the nudging of area employers. Some of the classes count toward two- and four-year degrees. Other schools offer certificates. Although the use of medical marijuana has been legal in Canada since 2001, the rise of recreational toking has fueled a hiring boom as growers rush to scale up production of smokable buds and oils. Openings have tripled over the past year and now represent 34 of every 10,000 job postings, according to Indeed Canada, an employment site. “The green rush,” Alison McMahon, founder of web recruiter Cannabis At Work, called it. Educators have seized on the moment, pledging to equip students for greenhouses and laboratories and storefronts. In January 2020, McGill University in Montreal will offer a graduate degree in cannabis production, open only to students with botany backgrounds or bachelor’s degrees in related fields. The school’s new focus on marijuana may seem edgy, but studying pot cultivation requires a grasp of hardcore science, said Anja Geitmann, dean of McGill’s faculty of agricultural and environmental sciences. “Genetics, breeding — there are multiple strains that have a different chemical composition,” she said. Durham College in Ontario, meanwhile, unrolled its Cannabis Industry Specialization program this fall, promising to launch careers in the “rapidly expanding cannabis sector,” according to its website. GrowWise Health Limited, a private firm nearby, helped design the curriculum. And Kwantlen Polytechnic University in Vancouver now offers a Retail Cannabis Consultant certificate, the school announced this year, which educates future pot sellers on “compliance, customer service, and competence in a complex and evolving industry.” The need for skilled cannabis labor is expected to further intensify next year once lawmakers authorize the sale of edible products. Marijuana-laced brownies and other mood-altering treats are projected to account for half of the legal industry’s sales, according to Canadian forecasts. Beleave, which runs three Ontario grow operations and recently acquired the retail chain Medi-Green, plans to open two more greenhouses in 2019. The expansion will practically double its workforce to 120 or so workers, Ferreira said. He needs people who can nurture different strains of marijuana, masters of soil and light and pest control. He needs scholars of Canada’s health and safety regulations — the government requires producers to keep a record of every individual who comes in contact with the plants. He needs someone to maintain that access log and monitor the cameras. “These are skill sets that have only recently been well-characterized and defined,” Ferreira said, adding that applicants who have merely grown marijuana in their basement don’t make the cut. Hearing from employers who struggle to fill vacancies inspired Ontario science professor Bill MacDonald to create Niagara College’s Commercial Cannabis Production program. More than 300 people, he said, applied for this year’s inaugural 24 spots. (People with business, science or agricultural degrees are welcome to take the year-long class.) “I had licensed producers come to the college and say, ‘We need highly trained personnel,’ ” MacDonald said. “The demand is just huge.” His students include flower farmers, a former chief information officer and a retired Royal Canadian Mounted Police officer. They take field trips to pot laboratories and intern at grow sites. Salaries in Ontario start around the equivalent of $60,000, he said, “but can move up very quickly.” Producers are scrambling to meet consumer interest, but a lack of ready talent is slowing growth (and sparking concern among some businesses that buyers will turn to illicit sources). “I’ve heard several times over just the last month: ‘Don’t you have any students? We are looking for qualified people,’ ” said Geitmann, the McGill dean. “They’re happy to have someone with a plant background at all and often train people on-site.” Students view the new crop of courses as an adventurous career twist or a way to earn more money. Laurie Zuber, 39, enrolled in Niagara’s cannabis production program two months ago after her mother saw a commercial on television. “She called me like, ‘You should apply for this! Do it!’ ” Zuber said. Zuber, who has spent the past 16 years as a grower at a plant nursery, figured: Why not? The program was a $10,000 investment — but it could potentially double her earnings. Zuber doesn’t smoke marijuana. Tending to greenery, she said, is her favorite part of the work. “They’re my little babies,” she said. “I love watching them from the seeds.” To read more visit: https://www.washingtonpost.com/business/2018/12/05/canadians-launch-weed-schools-amid-pot-labor-shortage/?noredirect=on&utm_term=.f0332e967e04