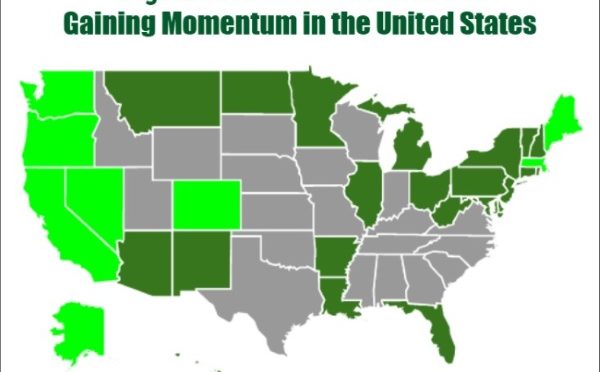 It is clear: Americans want legal weed, whether it be for medical reasons, recreational use, or both. Currently, medical marijuana is legal in 29 states and the District of Columbia, with the remaining states quickly following suite. Legalization of recreational pot is spreading slower, but spreading it is nonetheless. Many states are holding referendums with adult-use marijuana on the ballot.

Six out of every 10 Americans, or 61 percent to be exact, now support the legalization of recreational weed. According to the Pew Research Center, this is double what it was back in 2000. It is also nearly five percent higher than it was just a year ago. The survey, conducted in October last year, shows voter support for weed increasing at an unignorably steady rate across the United States.

Marijuana is now legal recreationally in nine states and Washington D.C. Some are enjoying skyrocketing economic benefits, including more tax money for infrastructure and other government-funded programs. Employment is higher, tourism booming. Although there are challenges, such as meeting demand and competing with the black market, these states all allow recreational pot in some way:

Colorado was the first state to legalize recreational cannabis. Tourists flock to the state to enjoy the many pot-friendly activities on offer, such as tours, classes, events, and more. Colorado is doing well. Crime rates are down, employment is high, and people there are healthier and happier.

Washington State soon followed Colorado’s example. Although pot is legal across the state, including in Washington D.C., only state-licensed outlets can sell it. There are restrictions in place, which mimic its liquor laws, but if you comply with them, then you will be a happy stoner indeed.

Anyone 21-years and older can light up legally in Alaska. The state legalized recreational use in 2015 and its first weed shop opened the next year. Alaska is enjoying a roaring pot tourism trade. Over two million people visited the state lastyear and spent nearly $2 billion on weed-related products and activities.

Although recreational weed is legal in California, since New Year’s Day this year, you cannot find it everywhere. Some cities, particularly in the Central Valley area, such as Bakersfield and Fresno, put a ban on sales. Despite this, the state allows legal adults to buy, use and grow limited quantities of pot.

Maine is more liberal with its weed use regulations than other states are. Mainers can possess as much as 2.5 ounces of cannabis; more than double what others allow. However, you cannot get it anywhere in the state. Governor Paul LePage just recently vetoed a bill that would permit recreational sales.

Massachusetts residents can grow as many as 12 cannabis plants at home and carry an ounce of pot on them. Lawmakers postponed its legal market, however, from January this year to July. The state is still busy getting its recreational marijuana industry in order.

Since Nevada launched its recreational market in July 2017, it has $20 million more in its coffers. The state does not permit anyone to grow their own, however, unless they live 25 miles from a retail outlet. You can still buy pot and use it, while supplies last anyway. Stores quickly run out of stock to sell.

Oregon legalized recreational weed in 2015. Since then, it has paid $85 million in cannabis taxes to fund public health initiatives, schools, local government, and police departments. You can carry an ounce of weed there and grow up to four plants at home. You can even gift edibles, if privately ingested.

Vermont is the first state to legalize weed through its legislature, instead of through a ballot initiative. You can carry an ounce there and have two plants growing at home. However, the state’s lawsdo not establish a legal market for either the production or sale of marijuana.

Some other states are considering whether to legalize or not, while some are just waiting for their legal laws to come into effect. Michigan, New Jersey, New York, Virginia and Wisconsin are states experts think will legalize weed fully soon. Thirteen states already decriminalized marijuana, so you will not go to jail if police catch you with it, only pay a fine of between $100 and $500. These states are:

Despite the federal government stubbornly refusing to legalize marijuana in any capacity, it will not be able to stave off public pressure for too much longer. More and more states are legalizing weed, ultimately rendering federal law irrelevant. However, even though pot is legal already in some states, it is important to remember that they still have regulatory laws. Do not break them when visiting!

Dorothy Watson writes for Pot Valet, an innovative online weed delivery service in California. As such, she spends her time researching the benefits of marijuana and letting the world know about them. She also advocates for legalization to spread across the entire world.