I wandered over to a recent “cooking with cannabis” course hosted by Westville’s Women Grow CT to learn how to make some summer-themed edibles: lemonades, barbecue sauce, and the classic medley of baked goods. What I got was a glimpse into a budding industry.

“Has anyone heard of their endocannabinoid system?” Ellen Brown, cannabis education and activist, asked the room.

A few in the room of 10 audience members nodded or admitted to hearing about it, but waited for Brown to chime in with more facts and demonstrations before asking questions.

The audience was a mix of advocates, caregivers, patients with mental and physical health concerns, and curious locals anticipating new laws. After a few rounds of questions, Brown took the stage as a marijuana savant. 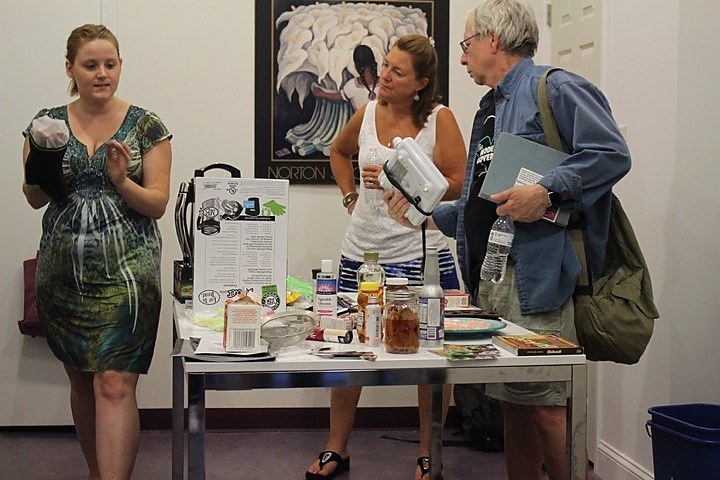 “We’re building community here,” said Kebra Smith Bolden, Women Grow CT’s market leader. She made sure everyone was comfortable, hydrated, and ready to learn from Brown, her former teacher from Sinsemilla Seminars located in Boston. The two women have prompted a series of seminars at the Women Grow CT office in Westville. They said they seek to educate the community about safe cannabis practices and new recipes.

Brown said that the market potential for cannabis led her to move to California and join what’s being called the Green Rush — the expansion of weed-related industry as legalization has progressed across the country. During her time working in dispensaries and cultivation in California, Brown was prompted to make edibles, tinctures, and hashes from the excess materials. When life gives you excess cannabis, make infused lemonade.

At a cannabis cooking class, one may expect platters of concoctions drizzled in cannabutter and oils. Spreads of sweet gummies, brownies, cookies, candies to indulge in. However, with the current Connecticut laws surrounding cannabis use in place, our class simply imagined that the chocolate ganache we dipped our assorted fruits in was infused with cannabis.

Instead of a rehash of Bong Appetit, the biggest mouthfuls at Brown’s cooking class were lessons on endocannabinoid systems, arachidonoylglycel, anandamide, and a range of concerns and safety practices.

Brown went on to describe and explain the differences among cannabinoids like THC and CBD, as well as terpenes such as limonene and myrcene. Not a tasty combination of words, but as she suggested, they offered very important ways to understand the effects of different strains of marijuana. The different attributes of cannabis interact with one another, making for different aromas, flavors, and focuses on the body. It “can be dank, it can be really sweet, or somewhere in the middle,” she explained, but even so it was fair to ask, “why is it interacting with my body?”

Knowing your own body’s endocannabinoid system, Brown explained, could make the difference between a getting a good night’s sleep or going out for a five-mile run.

Before Brown taught us how to identify a good strain, the best ways to test, and the ways in which cannabis interacts with our bodies, she quizzed us— lightly. If growers and dispensaries were not aware of the specifics of the plant and products they sold, she reasoned, they are neglecting to provide sufficient and effective care.

Robert Specht of Hamden raised his hand. “I don’t think they — the growers — could answer any of your questions. They don’t know enough…. It’s just a product to them,” he said. A few people nodded in agreement. Specht said that he has been advocating for legalization for nine years and wanted those involved to educate themselves.

In between a lesson, I sneaked away to ask Bolden about why this seminar series was important. Why edibles?

Bolden told me that patients with prescriptions for medical marijuana vary and that “every method of consumption doesn’t work for everyone. Some can’t tolerate smoke.” As far as the edibles were concerned, although they were fun, Bolden understood them an opportunity for patients to “use their medicine in a new way, choose from options, and create different ways to consume.”

Much like the participants in the room, Kebra was concerned with the ways in which people obtained cannabis.

“When you’re on the street, you go by what people say. In a class, or just on your own — it forces you to educate yourself.”

I settled back into the room to hear about different ways to infuse cannabis, from almond oil to bacon grease to just lard. Eventually the room was filled with subtle puns, personal experiences, and dispensary tales.

Dorothy Lunhn drove the distance from Middletown to keep up with the latest information about medical marijuana. She currently works in the cannabis industry at the Arrow Alternative Care dispensary in Hartford and told me about her experiences as a caregiver and concerned friend. Lunhn explained that some of the challenge with providing care with cannabis in Connecticut was that “the state changes the law so frequently.” She mentioned later that evening that the dispensaries in Connecticut seldom gave much advice.

We finished the evening with a hands-on cooking demonstration, nibbling on some fruit with regular chocolate ganache.

As the state anticipates budget negotiations, possibly reintroducing a bipartisan effort to amend the law for recreational cannabis use for people 21 years or older as well as permit registered retailers, the cannabis cooking class anticipated a host of issues. Just to legalize, to grow, or to be able to use is it is not enough. The cooking class illuminated the conversation of legalizing cannabis in Connecticut by asking questions well beyond age restrictions. When the state House of Representatives debated legalization, Republican Rep. Vincent Candelora mentioned that in order to enact legislation we must see how it plays out in other states. Our class was ripe with news on Maine, Nevada, Minnesota, Massachusetts and ultimately concluded that limited knowledge on cannabis and an aversion to engage in the conversation on what legalization in Connecticut should look like are major issues. Julia Hawkins, from Hamden, explained that whatever regulation might be enacted should be as advocates imagine: “empowering and educational.”