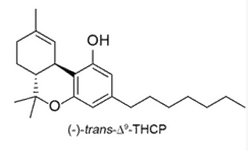 As 2019 came to a close—a year defined, in many ways, by a sharp rise in cannabis research interest—a report from a team of Italian researchers in the journal Nature on the first-ever isolation of two newly named natural cannabinoids: Δ9-tetrahydrocannabiphorol (THCP) and cannabidiphorol (CBDP).

The structural identification and potential potency of THCP at CB1 and CB2 receptors is of particular interest to pharmaceutical development and may help elucidate why some cannabis chemovars are seemingly more potent to consumers, both in their therapeutic and intoxicating effects.

Understanding THCP in Relation to THC

Since its isolation and synthesis in 1964 by a team of Israeli researchers led by Dr. Raphael Mechoulam, THC has held the spotlight. More is known about this common cannabinoid and the way it engages with the mammalian endocannabinoid system than any other cannabis compound because of the molecule’s potent concentration in the plant and its powerfully intoxicating effects via engagement with the CB1 receptors in the brain.

The Cannabis sativa L. plant is capable of producing nearly 150 individual cannabinoids, most of which are unique to the plant. The way in which these compounds play out together in a given phytochemical profile and the endless combinations of these cannabinoids between varietals, or “strains,” makes cannabis a “pharmacological treasure trove” unlike any other, according to Mechoulam.

Most of these rarer cannabinoids, however, have yet to be isolated or characterized. Advances in cutting-edge chemical analysis have only recently made it possible to begin siphoning out trace quantities of these minor molecules. With the isolation of THCP, scientists have uncovered another piece of the complex pharmacological puzzle that is cannabis. One that is seemingly more powerful than THC itself.

“The research represents a starting point towards a wider investigation to understand how much THCP and CBDP are present in the different cannabis chemovars,” study author Giuseppe Cannazza wrote in an email to Cannabis Business Times. “Indeed, we have reported the presence of these phytocannabinoids in one particular chemovar of medicinal cannabis supplied by the Italian state. We do not know whether other chemovars can produce THCP and CBDP and to what extent. Being unknown, they have never been searched, remaining among the numerous unnamed peaks in the chromatographic analyses of cannabis chemovars.”

Although scientists have not found THCP at the same profound percentages as THC within the plant, both in vitro (outside of a living organism) and in vivo (within a living organism) preliminary studies by the research team have demonstrated cannabimimetic properties—meaning the compounds are able to engage with the endocannabinoid system, specifically via CB1 activation—that far exceed the potency of THC agonism (activation) at CB1 and CB2 receptors in the neutral, or decarboxylated form. Activation of cannabinoid receptors by raw, unheated THCPA was not examined in this study.

As a point of reference, investigators used the known dosing response curve and cannabinoid receptor binding affinity of the synthetic cannabinoids CP55940 and WIN 55212-2 on purified human CB1 and CB2 receptors in an in vitro model (cell culture). What they found was a naturally-sourced cannabinoid with a binding potential that rivaled these synthetic compounds—both known for having potent receptor engagement. Of course, the trick with CB1 activation in the brain is that the stronger the engagement, the easier it is to end up with unwanted, potently intoxicating effects. In the case of THCP, less may be more.

The CB1 binding potential of THCP was further evidenced via an in vivo mouse model that demonstrated behavioral and physiological effects similar to THC in a classic tetrad test but at half the dose typically needed to produce the known effects of CB1 agonism—specifically, hypomotility (movement deficiency), analgesia, and catalepsy (a trancelike state marked by loss of voluntary motion in which the limbs remain in whatever position they are placed, according to Merriam-Webster). The strong binding potential could help explain why certain chemovars are better at giving strong therapeutic relief unexplained by THC alone. Now that the compound can be identified through phytochemical testing, it may prove particularly important for medical patients searching for potent chemovars. This discovery further highlights the need for full-spectrum testing, not just THC and CBD, for flower products within a dispensary setting.

What Makes THCP So Potent?

The potential potency of THCP is associated with how many carbon atoms it carries on its molecular tail—its chemical structure. As the authors of the Nature study point out, for molecules that readily engage with CB1 receptors, like THC and THCP, scientific literature suggests that CB1 affinity increases as the alkyl side chain extends. For instance, THC has a 5-carbon, or pentyl chain whereas both the synthetic reference molecule CP55940 used in this study and THCP have 7-carbon, or heptyl chain structures.

Strengthening the previous findings on the relationship between carbon length and CB1 activation, the investigators discovered that THCP engagement was 33-times more active at CB1 receptors and as much as 10-times more active at CB2 than THC. According to the authors of the study, this suggests cannabis chemovars with THCP presence may be more pharmacologically potent and likely to intensify intoxicating effects in consumers than the presence of THC alone would explain.

The researchers believe these molecules to be the first natural cannabinoids to present with more than five carbons on their molecular tails. Until now, only synthetic cannabinoids have demonstrated such long-chain potency. That is not to say, however, that there won’t be others that demonstrate equal or greater receptor affinity as scientists begin to isolated and characterize the many other natural cannabinoids the plant is capable of producing.

The isolation and characterization of THCP is only the beginning. The authors noted in the study that they will continue exploring the pharmacological activity of THCP and its relevancy to both the legal consumer market and pharmaceutical development.

Additionally, now that the cannabinoid has been identified, analytical testing labs working within the consumer market and chemovarietal research may want to review historical data and look for the now recognizable THCP peaks. The Italian study used one source, an Italian government-provided chemovar known as FM2, generally classified as a Type II chemovar. It remains unknown just how prevalent THCP is across chemovarietals or how a cultivator might breed for THCP-rich content. By looking at historical records across an industry teeming with phytochemical data, an understanding of just how common this new cannabinoid is will happen faster.

The study pointed out that evaluation of cannabimimetic activity for CBDP is also ongoing but was determined to not hold the same priority as THCP because the molecule, like cannabidiol (CBD), does not show a strong affinity for CB1 and CB2 receptors, likely preferring peripheral pathways similarly to CBD. Rather, ongoing investigations will be comparing the effects of this compound to the known anti-inflammatory, antioxidant and anti-epileptic benefits of CBD to determine if it is more or less effective at similarly studied doses.

“Our ongoing studies aim to address the biochemical pathways responsible for the biosynthesis of these new phytocannabinoids,” Cannazza wrote. “This could allow in the future for the selection of chemovars with high content of heptyl phytocannabinoids like CBDP and THCP.”

This discovery highlights the continued need for complete phytochemical profiling of cannabis chemovars, especially in regard to therapeutic use—whether a company is searching for natural isolates or a consumer is in need of potent CB1 engagement from over-the-counter dispensary products. Knowing whether or not a chemovar contains THCP could help healthcare providers and industry consultants alike give patients more bang for their buck, which could mean less product with more relief.