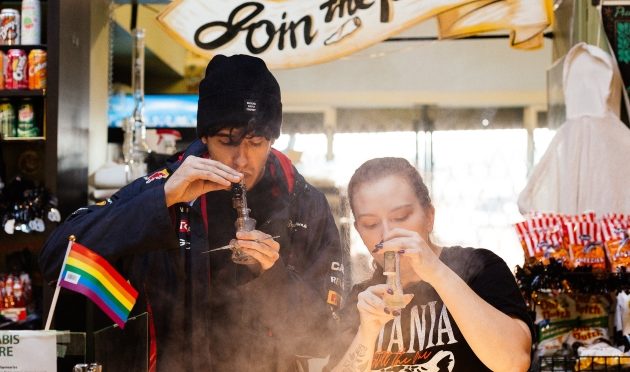 VANCOUVER — In the pot-friendly city of Vancouver, illegal marijuana dispensaries outnumber Starbucks outlets, and among the most popular is Weeds, Glass and Gifts. There, in a relaxed space reminiscent of the coffee chain, jovial “budtenders” sell coconut chocolate bars infused with marijuana and customers smoke powerful pot concentrates at a sleek dab bar.

When Canada legalized recreational marijuana, on Oct. 17, one of the central aims was to shut down the thousands of illegal dispensaries and black market growers dotting the country. But taming an illegal trade estimated at 5.3 billion Canadian dollars is proving to be daunting.

Many of the products sold at Weeds, Glass and Gifts are banned under the new law, which restricts licensed retailers to selling fresh or dried cannabis, seeds, plants and oil. Yet the retailer’s owner, Don Briere, an ebullient 67-year-old and self-styled pot crusader, has no intention of shutting down his four Vancouver stores or changing his product lineup.

He even has plans for expansion with a new line of outlawed canine marijuana treats, which purport to reduce pet anxiety.

“We’ll keep selling what we are selling,” said Mr. Briere, who in 2001 was sentenced to four years in prison for being one of British Columbia’s most prolific pot producers.

The Canadian government faces many challenges in stamping out the illegal marijuana industry. For one, there are too many black market shops like Mr. Briere’s for the government to keep track of.

And as sluggish provincial bureaucracies struggle to manage a new regulatory system, licenses to operate legally are hard to come by, giving illegal sellers added impetus to defy the law.

At the same time, the police and the public have little appetite for a national crackdown.

“The government taking over the cannabis trade is like asking a farmer to build airplanes,” Mr. Briere added.

“It’s a very Canadian way of doing things,” he said. “It won’t happen overnight.” There will, he added, be no mass raids, “guns and head-bashing.”

Nevertheless, he noted, newly created “community safety units” in British Columbia, staffed by 44 unarmed inspectors, have been given the power to raid dispensaries without a search warrant, seize illegal products and shut them down.

In the week since legalization took effect, there are signs of a chill, if a modest one.

In Toronto, police raided five illegal pot retailers, two days after the law went into effect. Dozens of others in Toronto, Vancouver and Ottawa have voluntarily closed their doors to avoid being shut out of the legal market.

Even Mr. Briere, who once owned 36 shops across Canada, is applying for government licenses for his stores, and has shuttered nine shops, including in Ottawa, Alberta and Saskatchewan. He is steering those customers to his illegal online shop instead.

On Oct. 17, only one legal government pot retailer opened in British Columbia, in the city of Kamloops, nearly a four-hour drive from Vancouver. That assured that Vancouver’s illicit trade would continue to thrive.

And that day, none of the roughly 100 illegal pot dispensaries in the city had the provincial licenses they needed to operate legally, even those that had applied for one.

In Ontario, where the government’s online Ontario Cannabis Store has been overwhelmed with soaring demand, some pot smokers unwilling to wait five days for delivery are reverting to their illegal dealers instead.

“Definitely going to use my dealer from now on his business is going way up because of your crappy service,” one frustrated customer wrote on Twitter.

In Montreal, some underground dealers, who do home delivery, are challenging the new legal market by offering two-joints-for-the-price-of-one deals.

As cities across the country grapple with a new national experiment, Vancouver offers a striking cautionary tale about the challenges of policing the illegal trade.

In this picturesque multicultural port city less than a three-hour drive from Seattle, marijuana is as much a recreational drug as a state of mind. Young professionals toke before work, take pot-fueled hikes and chat about strains of vaunted “BC bud” — grown illegally near snow-covered mountains in the southeast of the province — as if discussing fine wine.

For decades, cannabis has been so deeply embedded in the social fabric of the city that illegal pot shops operated with impunity as so-called compassion clubs for those seeking medical marijuana, with the police largely turning a blind eye.

But in 2015, City Hall officials, fed up with the proliferation of black market dispensaries, including some selling to minors, passed tough regulations stipulating, among other things, that shops must be about 1,000 feet from schools, community centers or other outlets.

After dozens of dispensaries brazenly flouted the new rules, the city in 2016 began fining transgressors, issuing 3,729 tickets amounting to more than $3 million in fines. But the dispensaries mostly ignored them; only $184,250 has been paid.

Then the city began trying to shut down illegal operators with injunctions.

In March of this year, 53 dispensaries banded together to file a constitutional challenge, saying closing the operators would breach Canada’s Charter of Rights and Freedoms by denying patients access to medical marijuana they purchased at the black market stores.

“The City is using legalization to try and impose Prohibition,” said Robert Laurie, the lawyer representing the dispensaries.

The case is before British Columbia’s Supreme Court.

Kerry Jang, a left-leaning councillor on the Vancouver City Council who is also a professor of psychiatry at the University of British Columbia, and who helped develop the 2015 rules, said the injunctions were necessary to root out “a wild West” of illegal dealers.

Today, those who want to operate legally must pass rigorous criminal background checks and apply for a $30,000 license from the city.

But Professor Jang conceded that the restrictiveness of the new federal cannabis law posed enforcement challenges. “If you make cannabis legal but restrict where you can use it, it will just go underground.”

The challenge of enforcement is all too visible on Vancouver’s gritty downtown east side, an epicenter of Canada’s opioid crisis. Hundreds of addicts sit sprawled on the pavement every day, shooting Fentanyl, a potent synthetic opioid that Professor Jang said killed, on average, seven people a week in Vancouver.

Traffic is periodically interrupted by the sound of sirens as police officers break up drug deals.

Chief Constable Del Manak, police chief of Victoria and president of the British Columbia Association of Chiefs of Police, noted that the police had to grapple with Fentanyl overdoses, violent crime and sex offenders, and must prioritize resources according to public safety.

Investigating whether British Columbia residents are violating the law by growing more than four pot plants per household is not a priority, he said.

The legalization of recreational marijuana in Colorado, Washington State and Uruguay, he added, has shown that “it is naïve to think that just because cannabis is legalized, the criminal will walk away from a highly lucrative industry.”

Nevertheless, as the government floods the market with legal cannabis, prices are falling, squeezing out illegal growers. Black market growers who were able to fetch more than $3,000 United States dollars for a pound of cannabis five years ago complain that today they can barely get $1,000.

The new legal marijuana supply chain was in full force on a recent day outside of Vancouver at Pure Sunfarms, where immigrant workers in surgical masks were trimming buds from cannabis plants next to a sprawling greenhouse that once housed tomatoes.

Rob Hill, chief financial officer of Emerald Health Therapeutics, a licensed producer which owns part of Pure Sunfarms, predicted that it was only a matter of time before black market growers went out of business as consumers demanded the purity of government-approved pot, free of contaminants found in some street marijuana.

“We expect a new consumer market of women age 35-45 who will smoke pot instead of drinking chardonnay,” he said.

Legalization is doomed to fail, he added, because there is so little will to enforce it.

He said he had accumulated heavy unpaid fines from City Hall, had no intention of applying for a license, and was far more concerned about being able to provide cannabis to the elderly and ill customers who relied on him. “In Vancouver,” he said, “you have to make an effort to get busted.”