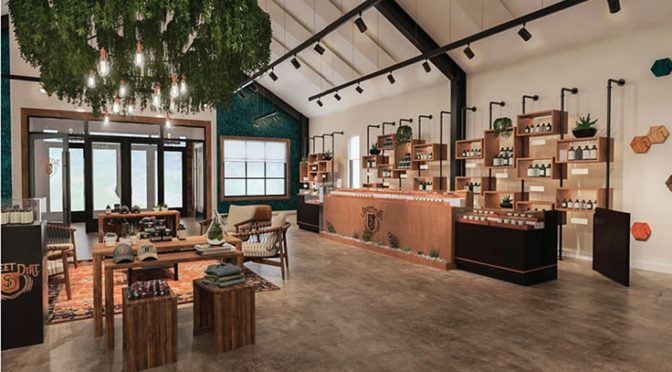 Despite the years-long rollout of the adult-use market, Jim Henry, CEO of Sweet Dirt, a medical cannabis operator that holds multiple conditional licenses in the adult-use program, says Maine’s cannabis industry will be worth the wait.

“They’ve done their diligence and … they’ve been incredibly thoughtful about this,” Jim says. “The length of time that the rollout has taken has certainly been challenging and sometimes, to some individuals, frustrating. But I think the state has done a really nice job and they’ll actually have a really nice program.”

Sweet Dirt was founded in 2015 by a married couple, Hughes and Kristin Pope, who were registered caregivers under Maine’s medical cannabis program. Operations ramped up near the end of 2018, when they opened their first storefront for medical sales.

Then, at the beginning of 2019, the company began preparing for the forthcoming adult-use market by submitting its licensing applications and raising capital to acquire and build out additional cultivation, extraction, manufacturing and retail facilities.

“This sounds like a long time out, but we were under the impression that adult-use would probably be happening right around the first quarter of 2020,” Jim says. “There were some hiccups along the way, and then we experienced a global pandemic, which slowed things down, as well.”

Overall, though, Jim says Maine’s Office of Marijuana Policy has done “a very nice job” with the rollout of the adult-use market.

“Both the state and the municipalities have really studied what happened out west in places like Oregon, California and Colorado, and tried their hardest to make sure that they did not see the same kind of hiccups that some of those places saw,” he says.

Sweet Dirt was on track to be a vertically integrated medical cannabis operator in Maine when a fire damaged the company’s indoor cultivation and extraction facilities, as well as its commercial kitchen, in June 2019. No one was injured, the facilities were fully insured, and from the disaster came opportunity, as Sweet Dirt pivoted its business plan toward the next chapter.

“It allowed us to rethink how we were going to attack the adult-use market,” Jim says. “We saw it as an opportunity. Again, lots of challenges came out of it [and] it was not a perfect situation, but we certainly saw the opportunity in that.”

Sweet Dirt is headquartered in Eliot, Maine, right along the New Hampshire border. The town has been very accepting of the cannabis industry, Jim says, and voted in 2019 to allow adult-use businesses within its borders.

Eliot was one of the first municipalities to opt in to the program, Jim adds, and Sweet Dirt plans to be vertically integrated there with cultivation, extraction and manufacturing facilities, as well as a medical and adult-use dispensary.

Sweet Dirt plans to be vertically integrated in Eliot with cultivation, extraction and manufacturing facilities, as well as a medical and adult-use dispensary.

The company holds five conditional adult-use licenses from the state—two for cultivation and three for retail—and it is awaiting conditional approval on a manufacturing license. In addition to Eliot, Sweet Dirt has applied for municipal licenses in Portland and Waterville.

Sweet Dirt reworked the facilities on its existing plot of land in Eliot after the fire and ended up constructing a 32,800-square-foot greenhouse that the team calls “Shangri-La.”

“In a manner of speaking, it’s a religious experience being inside it,” Jim says. “It’s quite the facility.”

The company expects the project to be completed in the fourth quarter of this year, just in time for the launch of adult-use sales.

A Commitment to Maine

As Sweet Dirt transitions to the state’s adult-use cannabis market, the team is committed to celebrating its Maine roots through its brand aesthetic.

VP of Marketing Rebecca Henry says there is an appreciation for craft businesses in Maine, from food to the craft beer industry, and Sweet Dirt is looking to offer that same craft experience in the cannabis market.

“What we’re trying to achieve is elevating the brand, the conversation and the buying experience, making it something where you’re going into your friend’s upscale home and purchasing and feeling it’s a friendly, safe place to buy clean, quality product and to explore and learn,” Rebecca says. “We’ve created that really inviting environment in our stores and packaging. We’re very focused on the communities we serve. We’re careful in the products we’re curating, the products we’re producing and even our packaging so that what’s getting dumped into our local transfer stations and dumps is as friendly as it can be to the environment.”

Sweet Dirt is certified through the Maine Organic Farmers and Gardeners Association (MOFGA), which recognizes organic farmers and food producers in the state.

“I think fewer than 15 of the thousands of caregivers in the state voluntarily sought out that status, where we would have inspections and certain quality control that we’d have in place and measures to ensure we’re growing truly organic and organically grown product, certified clean,” Rebecca says.

Maine welcomes about 36 million tourists per year, and in addition to local traffic, Sweet Dirt anticipates a boost from tourism when the adult-use market finally launches.

“That from our standpoint is a huge advantage,” Jim says. “We have really looked at the way that we position our location in Waterville in central Maine by the ski resorts, by the Belgrade Lakes, [and] in Portland, … in the largest municipality in the state, where all the cruise ships come into town and where the airport is. … And then Eliot is right on the border of Maine, where 10,000 cars travel over the bridge every Saturday morning from the eastern seaboard and … their first [stop] in the state of Maine is Eliot. We’ve really looked at the tourism market in the state and adjusted our strategy from that standpoint.”

When hiring new employees for its expansion to the adult-use market, Sweet Dirt focuses on customer service and product training to ensure the staff is prepared to serve an expanded customer base.

“If we hire the right people and we are diligent from day one about making sure that they understand what this company is about and the ethos that this company is trying to portray to the general public, then I think we’ve done a really nice job from a hiring standpoint,” Jim says.

Sweet Dirt plans to hire an additional 125 to 150 employees within the next year, and the foundation is what Jim calls “one of the best executive teams in the entire state,” which is 70% female.

“We have been very diligent about the people that we’ve brought on board from all walks of life, some from in cannabis, some from out of cannabis,” he says. “But everybody on the executive team brings something to bear that has made this a special organization.”

Jessica Oliver, Sweet Dirt’s VP of Cannabis Operations, has worked in Maine’s medical market for nearly a decade, and she says adult-use businesses can learn from the medical industry’s early growing pains.

“I remember when this program launched in 2011 with everybody scrambling for supply and limiting what folks could purchase,” Oliver says. “To see the medical market evolve into such a mature market is something we’re really looking forward to for adult-use, but we also know we’ll have the challenge of the product supply chain meeting demand. I think our experience in dealing with that in the medical market gives us a confidence and a path forward to get through that in adult-use.”

“As we’ve seen in other states, the legislative statutes can perhaps be a little bit tight at the beginning, and then as the governing bodies get a little bit more comfortable, things change and loosen up, so we’re preparing for and anticipating the changes to come and also pivoting where we need to [in order] to meet the standards right out of the gate,” she says. “I would say we all in all feel well-prepared for the challenges that we’re going to face.”

The COVID-19 pandemic has also taught Sweet Dirt some valuable lessons, while changing the way the company does business.

Maine has experienced a 30% increase in medical cannabis enrollments since the pandemic began, Oliver says, which has increased medical cannabis sales across the state. Maine’s medical cannabis businesses were deemed essential during the state’s coronavirus-related shutdown, and Sweet Dirt was able to retain all its staff—and even expand—while many businesses in other industries were furloughing and laying off employees.

“I think we’re extremely fortunate to be in an industry that is clearly recession-proof,” Oliver says.

“From day one, from the moment that this pandemic started, we have, as an organization, taken our employees’, our customers’, and our vendors’ health and safety as paramount,” Jim adds. “It’s more important than any business plan we have. We were able to incorporate that attitude with continuing to build out. Certainly, things might have taken a little bit longer than they would have previously, but the process of getting to adult-use is taking a little bit longer because the state, the OMP and the legislature all felt the same challenges that we did. So, we feel like we’re in this together.”

Sweet Dirt has implemented curbside pickup and social distancing into its policies and procedures, and over the next several months, the company plans to ensure all of its new stores are built out and opened, new employees are hired and trained, and that it has the right supply and the right partners to meet market demand.

In the longer-term, Sweet Dirt would like to not only grow its existing supply chain, but also expand to additional municipalities in the state.

“One of the things [Jessica] taught me very early on is, in this industry, you can never have enough space,” Jim says. “We have acres of land that we are using, and we always find that we can always use more space.”

Sweet Dirt will also strive to maximize efficiency as it settles into the adult-use market, he adds. “We want this to be an organic, well-thought-out product that comes from our cultivation, but we also want to make sure that we’re maximizing the efficiency so that we can have the most amount of product and the best product out there for our customers.”

“You can’t get a better state than the state of Maine for an industry like this,” Jim adds. “It really is the dream state for this, from a geographic standpoint [and] a topical standpoint, from the rocky shores to the mountains to the beaches. … This is about a company that is really committed to that state and making sure that we not only brand ourselves as it relates to being a Maine-based company, but [that we also try] to give back to a state that has really given our employees so much.”